Rear Window is a 1954 American mystery thriller film directed by Alfred Hitchcock and written by John Michael Hayes based on Cornell Woolrich’s 1942 short story “It Had to Be Murder”. Originally released by Paramount Pictures, Rear Window stars James Stewart, Grace Kelly, Wendell Corey, Thelma Ritter and Raymond Burr. It was screened at the 1954 Venice Film Festival.

The film is considered by many filmgoers, critics and scholars to be one of Hitchcock’s best and one of the greatest movies ever made. The film received four Academy Award nominations and was ranked No. 42 on AFI’s 100 Years…100 Movies list and No. 48 on the 10th-anniversary edition. In 1997, Rear Window was added to the United States National Film Registry in the Library of Congress as being “culturally, historically, or aesthetically significant”.

After breaking his leg photographing a racetrack accident, a professional photographer, the adventurous L. B. “Jeff” Jefferies (James Stewart), is confined to a wheelchair in his Greenwich Village apartment to recuperate. His rear window looks out onto a courtyard and several other apartments. During a powerful heat wave he watches his neighbors, who keep their windows open to stay cool.

One night during a thunderstorm Jeff hears a woman scream “Don’t!” and then the sound of breaking glass. Later he is awakened by thunder and observes Thorwald leaving his apartment. Thorwald makes repeated late-night trips carrying his sample case. The next morning Jeff notices that Thorwald’s wife is gone, and then sees Thorwald cleaning a large knife and handsaw. Later, Thorwald ties a large trunk with heavy rope and has moving men haul it away. Jeff discusses all this with Lisa and with Stella.

Jeff becomes convinced that Thorwald has murdered his wife. Jeff explains this to his friend Tom Doyle (Wendell Corey), a New York City Police detective, and asks him to do some research. Doyle finds nothing suspicious; apparently “Mrs. Thorwald” is upstate, and picked up the trunk herself. 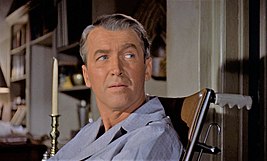 James Stewart as L.B. Jefferies
Soon after, a neighbor’s dog is found dead, its neck broken. The owner yells out into the courtyard, “You don’t know the meaning of the word ‘neighbors’! Neighbors like each other, speak to each other, care if anybody lives or dies! But none of you do!” All the neighbors run to their windows to see what is happening, except for Thorwald, whose cigar can be seen glowing as he sits quietly in his dark apartment.

Certain that Thorwald is guilty, Jeff asks Lisa to slip an accusatory note under his door, so Jeff can watch his reaction when he reads it. Then, as a pretext to get Thorwald out of his apartment, Jeff telephones him and arranges a meeting at a bar. He believes Thorwald buried something incrimating in the courtyard flower bed and killed the dog to stop it digging there, so when Thorwald leaves, Lisa and Stella dig up the flowers; they find nothing.

Much to Jeff’s amazement and admiration, Lisa then climbs the fire escape to Thorwald’s apartment and clambers in through an open window. When Thorwald returns and grabs Lisa, Jeff calls the police, who arrive in time to save her by arresting her. Jeff sees Lisa has her hands behind her back, wiggling her finger with Mrs. Thorwald’s wedding ring on it. Thorwald notices this, and realizing that she is signaling to someone, he sees Jeff across the courtyard.

Jeff phones Doyle and leaves an urgent message. Stella heads for the police station to post bail for Lisa. When his phone rings, Jeff assumes it’s Doyle, and says that the suspect has left the apartment. When no-one answers, Jeff realizes that Thorwald himself had called, and is heading over to confront him. When Thorwald enters, Jeff repeatedly sets off his camera flashbulbs, temporarily blinding him. However, Thorwald grabs Jeff and manages to push him out of the open window, as Jeff is yelling for help. Police officers enter the apartment as he falls to the ground; other officers have run over to break his fall. Thorwald confesses to the police soon afterward.

A few days later, the heat has lifted, and Jeff rests peacefully in his wheelchair, now with casts on both legs. The lonely neighbor is chatting with the pianist in his apartment, the dancer’s lover returns home from the army, the couple whose dog was killed have a new dog, and the newly married couple are bickering.

Lisa reclines on the daybed in Jeff’s apartment, wearing jeans and apparently reading a book Beyond the High Himalayas. As soon as Jeff falls asleep, Lisa puts the book down and happily opens a fashion magazine.

Used by permission of Wikipedia